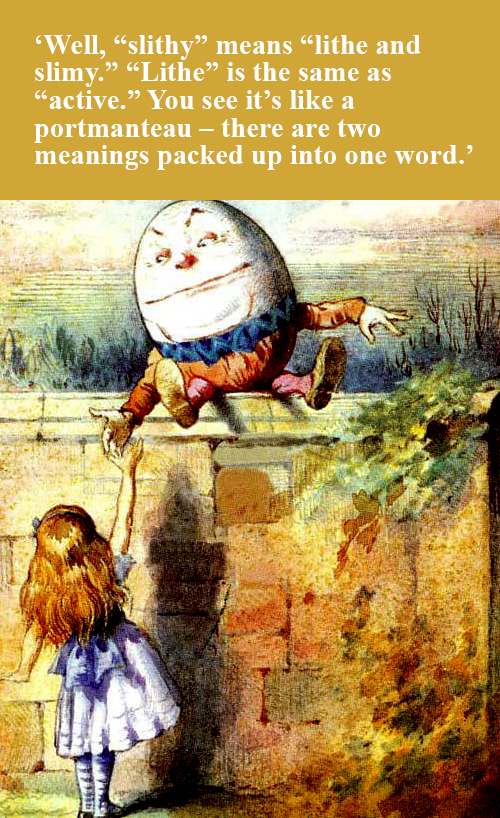 ‘A portmanteau word’ – doesn’t the phrase sound wonderfully exotic? How I yearn for someone to approach me while I’m sipping a dry Martini and ask, ‘Excuse me, but do you happen to have a spare portmanteau word?’

In a nutshell: a portmanteau word is one that consists of two words, or parts of words, combined together to form a new one.

‘Portmanteau’ is French for a large leather bag. Its linguistic origins lie in ‘porter’ ( ‘to carry’) and ‘manteau’ (‘coat’) meaning a carrying case for a coat or cloak that opens equally in two parts. Surely there could be a more accurate definition, though, as this brings to my mind a Gladstone bag? There is a far less sublime alternative: a ‘blend’. That brings to mind a jar of instant coffee.

Examples of portmanteau words
With company names and brand names becoming harder and harder to create (a good time to promote my blog ‘How Do Brands Come Up With Their Names?’) it’s little wonder that Twingo, Facebook, Groupon, Netflix, Instagram and Microsoft are all portmanteau namings.

(BTW, I think anyone who gets Wordle in one should be called a nerdle.)

However, Rabelais, the French Renaissance writer, seems to have been the first to use the technique, having  created the word ‘sorbonnagre’ (combining the Sorbonne and onagre – meaning donkey) to describe narrow-minded students.

Be creative: combine words
Combining words can be an incredibly creative process and even free up writers’ block. It was William S. Burroughs, the American writer and visual artist, who devised a cut-up method to create word collages – a technique that David Bowie adopted to create lyrics using a computer programme.

In this 1997 BBC clip, Bowie describes taking articles out of newspapers, books or his own poems, putting them all into ‘this little warehouse, this container of information’, then hitting the ‘random button’. He explained, ‘If you put three or four dissociated ideas together and create awkward relationships with them, the unconscious intelligence that comes from those pairings is really quite startling sometimes, quite provocative.’

Hmmmm, maybe I’ll try it with my next ad campaign …

Written by Caroline Gibson, a freelance copywriter who can combine words in ways to make a creative casserole – never a stew.