Gina Martin describes herself as a ‘writer + campaigner here for equality, planet earth and bloody good fashion,’ She was a victim of upskirting at a festival in 2017 and has used the power of social media in campaigning to make this a sexual offence in England and Wales. 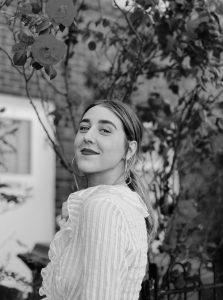 I found a selfie of me and my sister that we’d taken at the festival before the upskirting had happened and the guys were in the background. I posted it on Facebook and Twitter, captioned ‘The police can’t do anything to help me; the law can’t do anything to help me.’ I asked a bunch of influential friends to share it because I was so upset and just wanted the guys to be embarrassed. It went viral quickly so I created a petition. Once numbers started coming up and comments, I asked TV producers if they’d talk about the issue, saying ‘Look how many people care about this … we should be talking about this because it’s not a sexual offence.’

Social media isn’t about socialising anymore; it’s become so much more powerful than that.

CG: How have you maximised using social media to help your upskirting campaign?
GM: It’s been a pretty big learning curve. Social media became a galvanising tool for a community, activating people and getting them interested. With your own personal social accounts, you can just be shouting into a crowd of people you don’t know; there’s no connections being made. So the really interesting bit was in connecting different platforms. I’d be promoting a petition through Facebook ads with money behind it, which I would then share elsewhere. I had more industry professionals following me on Twitter, while there was a different audience on my Instagram with young women growing up in a world which is very, very active socially and they’re looking for things to grab hold of and to help with.

I started doing a lot of media interviews and found my lawyer at the height of that media attention. I went on Twitter to different law charities and law firms, asking for a lawyer to represent me. I said I didn’t have any money but that this was becoming a really high media case and that we can change this law if we really try.  I’ve now been working with Ryan Whelan, a criminal lawyer, pro bono for a year and a half now; he’s the best person in the world!

CG: Is there anything now you wish you’d done differently?
GM: In terms of the actual process of the campaign, I wouldn’t change anything. Even the whole Chope thing worked in our favour because that was like a live troll saying ‘n’o to protecting women, which gave us even more support. But I would change the way I dealt with social media because I don’t think I was ready for the attention and the pressure that came with it. I got a lot of online abuse and rape threats. So I could’ve protected myself better in that way.  That’s difficult to foresee when you’re working on so many things at once.

CG: There’s been a lot in the press about the challenges of being a blogger or vlogger: the loneliness and the reputation to be maintained. What challenges have you faced?
GM: With the social media landscape, you’ve a whole bunch of people going very fast into something that’s incredibly fulfilling. It’s wonderful that we’re hearing more and more people’s voices instead of just looking up to a celebrity who feels untouchable.

A couple of my friends are really big bloggers and the emotional baggage that comes with it is massive because you’re like a best friend to followers. They feel they know you because you let them so much to your life and talk about a lot of personal stuff.  One friend gets 150 emails a day that are tragic and hard to read: it’s a lot of emotional weight to take on. There’s half a million people who can get in touch with her as easily as I can get in touch with you now.

I get messages every week with detailed accounts of sexual violence. It’s really hard because you want to be a confidante but I’m not qualified to give advice and don’t have the time to reply to everyone. I forward these on to people I know at different charities who are qualified to help.

I’ll always be a writer, but one with a little activism streak.

CG: What lies in store next?
GM: I’ve always cared about social issues but never really had the opportunity to actually do something until this came along. So that’s probably me started on that road now. I want to tackle some of the issues on social media platforms next – the privacy and community standards – and try to make them a little safer for people.

CG: Define what creativity means to you.
GM: It’s the joy of having original ideas and an authentic voice, and being able to create something that’s innately what you care about – without any parameters. For me, personally, that means making people’s lives a little bit better or a little bit more positive or a little bit more joyful along the way.

Written by Caroline Gibson, freelance copywriter, as the fifth article in her series of blogs on what creativity means to people blazing the way in their particular field.